Once upon a time there lived an old woman. She lived in a cottage by the edge of a forest. It was mid-winter. The days had grown cold and the nights had grown longer and longer. One afternoon the old woman went to light her fire, but she had no matches left.

“I must go at once to the village to get some matches” she thought. It was a long way to the village, so the old woman made herself a sandwich, put on her thick coat and her warm winter shawl, and set off to the village.

To get to the village, the old woman had to go through the woods. After she had walked a little way she bent down to tie her shoelace. As she did, she heard a faint scratching sound coming from the hollow tree next to her. She looked inside the hollow and saw a little white bird caught in a vine. The old woman carefully freed the little bird and lifted it up out of the log. She saw that it had a faint golden star on its forehead. The poor little bird was freezing, so the old woman put it inside her coat, right next to her heart, to keep it safe and warm.

She had been walking for quite some time when along the path coming her way there was an old man. He was bent over and looked so thin and hungry that the old woman said to him

“Come, old man, sit with me and share my sandwich”.

They sat down together and the old woman tore her sandwich in half and shared it with the old man. When it was time to go the man said thank you and took the old woman’s hand. In it, he placed a golden key.

“You may need this on your journey” he said.

The old woman said thank you and put the key in her pocket, where the sandwich had been. As she walked away, the little white bird began to sing:

“The winter will pass, the birds will sing
The sun will return and bring the spring
Follow the gold and reach the light
To warm your heart on mid winter’s night”

The old woman continued on her way and then she came upon a little child who wore hardly any clothes but held onto a beautiful red rose. The old woman took off her big thick woolen shawl and wrapped the child in it from head to foot so she would be warm. The child said thank you and gave the old woman the red rose.

“Thank you,” said the old woman, and she held the rose up to her nose and smelt the rich soft fragrance. Then she continued on her way. And the bird by her heart began to sing:

“The stars look down from heaven above
And see this rose, a gift of love
Follow the gold and reach the light,
To warm your heart on mid winter’s night”

As she made her way further along the path she walked so often, to her surprise she saw that the forest path split in two. One way the old woman had walked on many times before, for it led to the village but the other path she had never noticed before. As the old woman went to walk on the village path, the white bird by her heart began to sing again:

“Take not the village path today,
The other Path will light your way,
Follow the gold and reach the light,
To warm your heart on mid winter’s night.”

The old woman loved to listen to the white bird’s song, so she did as the bird asked and took the other path.

Now this path led into the dense forest. In fact, it became so thick and dark that the old woman began to wonder about the white bird’s song. Surely this path was not leading to gold or light. But she could feel the warmth of the bird by her heart and trusted that all was well. The new path led down a steep hill and the path twisted and turned growing so thick that the bushes touched the old woman’s arms on either side and the branches came down so low that they touched the top of the old woman’s head as she walked through. It was like a dark tunnel.

Until the old woman saw a tiny golden speck on the ground, and then another, and another. Her heartbeat in her chest as she saw more and more gold on the path it was now totally covered in gold.  Looking up, she now saw a beautiful wattle tree covered in golden balls of light that had covered the path in soft golden balls. The forest had turned from green to gold with wattle trees lining the path, encompassing the old woman in gold. The old woman walked on a little further along the golden pathway until she came to a door.

From where she stood the old woman could smell the strong fragrance of roses, and she longed to go inside. Then the bird began to sing:

“You have the golden key within,
Use it now to let yourself in.
Follow the gold and reach the light
To warm yourself on mid winter’s night”

The old woman remembered the key from the old man and she took it from her pocket and unlocked the door. The door slowly opened revealing a beautiful cavern filled with roses and light. On a time-worn throne, shaped out of tree roots, Mother Earth sat, with a candle flaming brightly in front of her:

“Welcome old woman, I was hoping you would visit me this year.
Have you brought a gift for this mid winter’s night?”

As Mother Earth spoke, the old woman remembered the red rose she had been given by the child and she placed it by Mother Earth’s feet.

“Thank you”, said Mother Earth. “I’m glad you have chosen to come here today. Matches you may get from the village, but they will always run out again. But here in my chamber, I have a sacred flame which, if you care for it well, it will last your whole life long.”

At that moment the white bird flew out from under the old woman’s coat and flew around Mother Earth’s chamber. Then it fluttered its wings above the sacred flame, and as it did the star on its forehead grew brighter and brighter and brighter, and right in the very centre of the star there shone a little flame. Then the bird flew over to the old woman and landed on her shoulder.

“Now,” said Mother Earth, “it is time to make your journey home, but remember well what you have seen and felt and thought today.”

The old woman bowed and thanked Mother Earth for all that had happened and said goodbye with a happy heart.

From that day on she lived in her cottage with the little white bird and she was always warm and had a light to guide her along her way and a song in her heart. 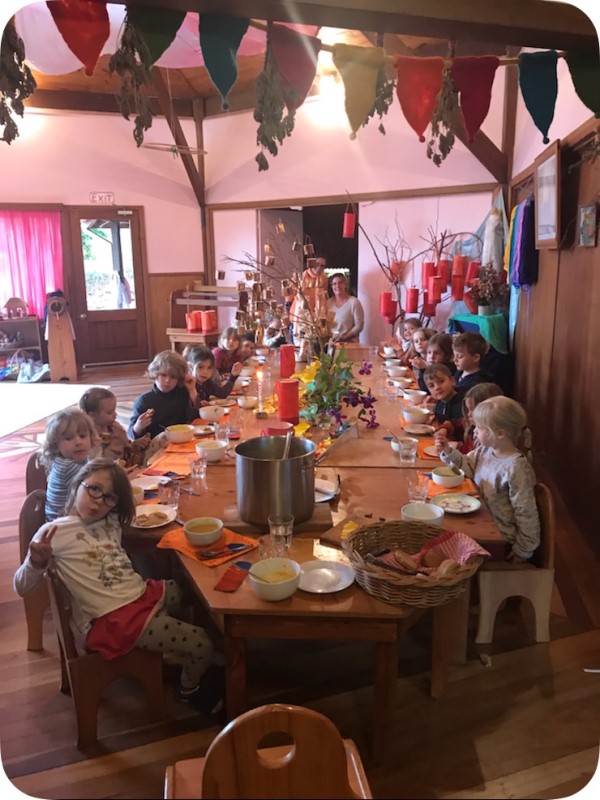