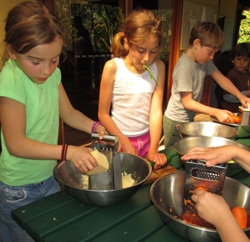 This is the beginning of the formal camps program at Chrysalis and, as such, the central theme is “first steps out away from home”. Further themes include (Atlantean), coastal ecology, geomorphology and building on social skills as a group. An overnight camp at school in Term 1 or 2 introduce the children to being away from home in a known setting. The children begin to learn the basic skills related to camping such as: 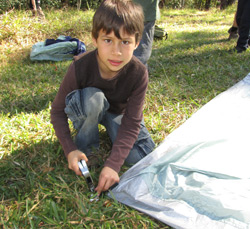 Later in the year the theme is the Aboriginal Dreamtime (Lemurian) story context, volcanic activity and fire as shapes of landscape, ecology particularly flora. Red Rock north of Coffs Harbour, Cathedral Rocks and Point Lookout are examples of places visited by our classes. There will usually be an “away” camp of 2-3 days where the children camp in one spot. Invitation to Aboriginal elders at the camping sites are organised for the children.

The theme for this year is the “human being working with nature and the environment, shaping and changing it”. Visits to farms and National Parks are the flavour for this year. Now the camps get a little longer, usually 3 to 5 days in length. They are also a little further afield. Some examples of camps in recent years for Class 3 includes: Marrook Farm and Timbertown, Grassy Head or Hat Head camping ground, Gibraltar Ranges, Minnie Waters, and Station Creek. The children learn how to: